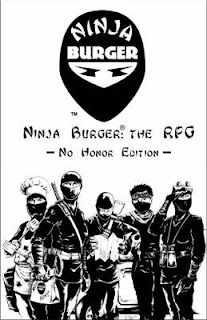 This is quick fun game with little prep time needed. Ninja Burger is considered to be a "beer & pretzels" game in that it' best played at a party and not to be taken seriously. There are a few previous editions of this game but in my opinion this one is probably the best. The 1st edition is almost impossible to find and the second edition had a more in-depth leveling system. Seeing as to how PCs get killed and screwed in funny ways, usually leaving only one survivor alive that can level up, it became a balance issue. Let's face it, the higher level would be more likely to win overtime. This one kinda went back to the game's roots. There is a skill advancement system but it's more balanced than the previous leveling system. You can pick the PDF of this edition up from RPGNow here for $4. The print version is no longer available. I don't know if they will ever enable the print-on-demand service at RPGNow but the book is so small you could print the PDF yourself if you prefer reading hard copies like me.

Based on the book "Ninja Burger", it's about modern day ninjas who feel their ninja skills are better utilized in the fast food industry. The demand for ninjas just isn't what it use to be and they gotta make a living somehow. Their motto is "Guaranteed delivery in 30 minutes or less or we commit Seppuku." These ninjas take their job very seriously and that's what adds to the humor. These ninjas go on epic, life threatening, harrowing quests just to deliver food. Facing traps, robots, pirates, samurais, evil ninjas, and whatever else that can be thrown at them. This game can be very creative once players get into it. Because the PCs are ninjas they have to be sneaky and methodical if they want to be successful. Sure they could bust in using their cool ninja weapons and ancient magic but that isn't ninja-like and a good way for a ninja to get killed. Character creation is simple and so are the magic and combat systems.

This game uses the PDQ (Prose Descriptive Qualities) rules system. I have played this system a couple times in the past with other RPGs. Personally, I don't care much for this system because I feel it's too light and loose but for this style of game I don't think they could've used a better rules system. You can get the bare bones PDQ rules for free here. Basically the player rolls 2 six-sided dice, apply a target number (the harder the task the higher this number, if the die result is equal to or greater than the target number the player succeeds. Also if a PC is skilled at the particular task, a bonus is added to the result depending on how skilled they are. This is essentially the entire system. It isn't bad and is inviting for non-gamers. Also for GMs who want a break from running the more serious games with in-depth rules may like this too. This is a game everyone can have fun with.
Posted by scullkrusher at 1:50 PM

scullkrusher
Moving on from my usual political topics to my own personal interests.